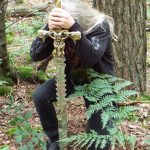 Once upon a time, long before the age of man the world belonged to the Dragons. They were the keepers of balance and protectors of the creatures that inhabited the planet. Among those creatures were the Unicorns with whom the Dragons shared a special bond, strengthened by a singular event that took place during the great war. The fair and pure Unicorns roamed the idyllic pastures and forests of Glynyd by the thousands and they possessed the power of healing. The Dragons lived in the higher mountain regions – the vast expanse of Aenoor –  they were the masters of the skies : their mighty wings carried them to any corner of the planet and their call was an assuring sound of security for all who lived under the blue heavens.

As beautiful and green the Earth appeared, there were also places of great danger. There were the badlands with their treacherous deserts and canyons. These places showed the earth ripped apart and scarred by the savage forces of nature. The dry rocky deserts were unable to sustain life of any kind for the sun singed the air during  the daytime while at night the temperature dropped to an absolute freezing point. On top of that, hot winds kicked up sandstorms which on a regular basis tortured the plains and lashed through the canyons, sandblasting any organic life form to nothing more but a handful of dust.

And yet .. there was life in the badlands. Living in elaborate cave systems dug out deep below the unforgiving surface, the Molgar – a race of protosapiens –  managed to live and thrive in their underground cities. Not only were they masters of building underground, their tunnel systems extended far beyond the badlands, connecting their cities worldwide. As the Dragons were the lords of the sky, the Molgar were the lords of inner earth ; They could start and control earthquakes and  could cause volcanoes to erupt and channel out the waste materials left over from their digging efforts, destroying lands of the Unicorn and killing many animals in the process.
In spite of their great achievements and undeniable intelligence, the Molgar were an aggressive and savage race keeping to their own, looking upon the surface dwellers with envious eyes, partially because their eyes and skin could not tolerate the bright light and u v radiation coming from the sun. Conflict and casualties were often witnessed by those living upon the surface when the Molgar emerged from their caves after sunset. This was but one of the occasions the Dragons were called upon and one could see them fiercely battling a dark menacing adversary whose formidable tools and weapons were virtually unbeatable once properly mounted.

One of the things the Molgar wanted most was the secret of long life which they swore to take from the Dragons by any means necessary but they’d never succeeded thus far, making them loathe and hate the surface creatures even more.

Then the day came that a meteorite impacted, the ground heaved as its massive body of iron and dirt went deep into the earth’s crust with a howling sound, right into the centre of one of the Molgar’s major cities, Gol Matoo. A howling that sounded like the call of a hundred Dragons roared through the tunnel systems and was heard even as far away as Ael Hathor, another Molgar metropolis located four hundred miles to the east.

Gol Matoo was completely obliterated and not one of its inhabitants survived this natural disaster. All that remained was a giant crater, three miles deep, eight miles across and rock, fire dust and debris shot high up into the stratosphere. As a result  the earth fell into shadow and the sun’s once warm and bright days were replaced by a cold half-light grey winter-like state which would last for many years to come.

When the other Molgar clans saw what had happened, they immediately held the dragons responsible, for in their view the Dragons had cowardly attacked their people. On that day they vowed to eliminate all life on the surface and thus take revenge for all the misery brought to them and they would stop at nothing to achieve their goal. This is how the war for world domination started: led on by Oomat , one of their most fanatic military leaders, the Molgar marched towards the surface….

The Molgar  planned their attack so well and it came so unexpected that no force in the world would have been able to do anything against this avalanche of madness. An earthquake destroyed the better part of Aenoor, lava flows burned immense parts of the forests and grasslands, leaving a scorched landscape behind and scattered its inhabitants in all directions. Even the Dragons ended up in small groups across the world. All those who couldn’t flee, fight or find refuge in time were ruthlessly slaughtered by Molgar warriors. Many deaths coloured the soil red and showed the earth weeping for this unnecessary genocide of its children.

Amidst this turmoil, Pandor was born, his mother Ieeryah slain just before he hatched and his injured father Nebucor captured by the Molgar and taken prisoner in one of their deepest caves. He was believed dead by all other creatures but the Molgar kept him alive to deliver them the secret of long life and great physical strength.

The orphaned Pandor was saved by the Unicorns who took it upon themselves to raise him. For they sensed something special about this little Dragon, something elusive that might well be the only spark of hope able to defeat the forces of evil and bring back the light into the world.

As Pandor is growing up he finds himself living in two worlds, neither of which he can fully comprehend. The love for the Unicorns and his adoptive family is beyond dispute, but being a Dragon he can never truly belong to this group. The Dragons on the other side do not fully accept him as one of theirs and taunt him on many an occasion. This leaves Pandor lonely and sad because he can’t really find his place in this world. During these difficult times he finds comfort and guidance with Serna, his Unicorn adoptive mother who loves him as if he was one of her own and she will never allow any harm to come upon the young Dragon.

Then one day he meets Tayla, a female Dragon who’s about the same age he is. She too is a orphan of the Molgar’s  onslaught, but she grew up among the Dragons. They become good friends and Tayla teaches Pandor more about the life of a Dragon. As Pandor struggles to adapt to these new ways, Tayla teases him from time to time which frustrates Pandor and makes him try even harder to fit in.
What Pandor does not realise, is the fact that Tayla silently carries a torch for him and that she would selflessly give up her life to save his. For she too is very aware of the powers emanating from Pandor, and she knows of an ancient prophecy that one day when the world is at its darkest, a Dragon will emerge from the plains. A Dragon who will grow up parentless among the meek and pure will lead the world into a new age of warmth and illumination.

Tayla has pledged her entire life to this one purpose ; making the prophecy come true. The fact that she falls in love with Pandor is pure chance.

Due to Tayla’s teachings, Pandor becomes more and more aware of his purpose in life and his skills are growing by the day – as are his powers. The path he has to take is revealing itself before him, getting clearer by the day. And although it seems impossible to resolve this senseless war, Pandor does not stop doing what he must to achieve this goal. Seeking council from Serna who has helped him through many difficult times, he finds the strength and stamina to cope with the situation and to stand firm as a leader. His determination inspires all and he earns the respect of the other Dragons who now accept his leadership and are willing to march against the common foe.

Reckoning day! All Dragons gather at Aenoor and take off towards Ael Hathor to finish the Molgar’s reign of terror once and for all and bring  Oomat to justice for all his evil deeds. Pandor taking point together with Tayla who never leaves his side, followed by all the other Dragon groups, which through the years have grown back to full force have now united to restore Aenoor in its original glory, once again being the absolute masters of the sky and today they fight side by side against their nemesis. This time the element of surprise is at the Dragon’s side, for Oomat in his arrogance never expects the Dragons to bounce back into large numbers, let alone to join forces and march against his empire of darkness. He figures that he can easily contain the scattered pockets of rebellious beasts whose feeble attempts to weaken his ranks lead to nothing more than their own demise.
The Dragons move into the attack and wave after wave hit hard upon the Molgar forces who are completely taken by surprise. For a second time the earth witnesses the atrocity of an all out war and, although they have the upper hand this time, many Dragons are slain. This time fate is on the Dragon’s side and the surviving Molgar are driven back into their caves. Oomat is taken captive and must now atone for all his monstrous acts, but before the Dragons can pass judgment on him he gets killed by his own people.
As it turns out they too have had enough from all those years of  forced military service, expressing their wish to return to their cave dwellings and just be left alone. So a truce is called and, as proof of their sincerity, the Molgar release Nebucor from captivity, weakened and tortured but still alive. As hard as he tried, Oomat has never been able to attain the secrets of long life and strength from the Dragon.

Finally, the sun rises once again over a world reborn : the dust in the atmosphere has finally settled and now gets washed away by the spring rains. Soon plants start growing again and the great forests too show a remarkable recovery due to the volcanic ash laid down leaving the soil extremely fertile. And not only the Earth proves to be fertile : all over the sounds of  new born are heard, taking their first – albeit insecure – steps into a wonderful world with exiting new things to discover every day.

The vast planes of Glynyd are teeming with activity once again and Aenoor gets restored in all its glory, the mighty towers once more visible from miles away as the sun’s rays light up their polished azure and emerald surfaces.